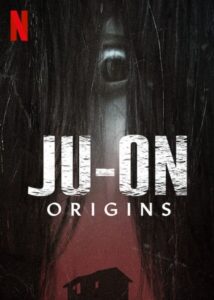 The origins of the Ju-On franchise date back to September 27, 1998 when two short films by series creator Takashi Shimizu aired as part of an anthology television movie titled Gakkou no Kaidan G (School Ghost Story G). The world was introduced to vengeful spirits Kayako and Toshio on that night, and Shimizu’s terrifying ghosts launched the Ju-On franchise. Like the ever-spreading curse which is central to the mythology of the series, Ju-On would go on to expand into various forms of media including novels, manga, a video game, and thirteen movies. One avenue the franchise hadn’t attempted to infect with its brand of supernatural vengeance in its two-or-so decades of existence was television, but that changed on July 3, 2020 with the release of Ju-On: Origins on Netflix.

Ju-On: Origins is a short series, six episodes of about thirty minutes each, and when I saw it pop up in my suggestions last summer, I ended up watching the entire series in one night. The show is sometimes creepy, occasionally perplexing, and often brutally violent, and it made me feel a lot of different things. Given the harsh and depressing subject matter the show tackles, “like” and “enjoy” seemed to be the wrong words to use to describe how I originally felt about Ju-On: Origins. I will, however, gladly say that I have been repeatedly drawn back to it ever since I first watched it. I’ve re-watched all six episodes a few times now, and they continue to draw me in each time. At this point, I think it’s safe to say I do enjoy Ju-On: Origins quite a lot, and I would recommend it to fans of the larger franchise.

I had originally intended to write about the show immediately after finishing it, but as I got to thinking about it, I wanted to think about it more. There’s a lot to digest in Ju-On: Origins, and I decided if I was going to write about it, I wanted to do it right. Well, one thing led to another, and I ended up not writing about it at all. I’ve recently started watching the series once again though, so I decided that this time I would record my thoughts about it. What I intend to do is to write a simple review of each episode as I watch them again, then cap it all off with an analysis of the series as a whole (and maybe a few spin-off articles looking at different aspects of the show). So right now, I will be taking a look at episode one of Ju-On: Origins.

The first episode is really all about introductions. We are introduced to most of the main characters, and we are even introduced to what the series is going to be. Rather than a prequel or continuation of any of the timelines from the movies, Ju-On: Origins frames itself as if it’s going to tell us the true origins of the movies. In other words, we’re about to watch the real-life stories that inspired the on-screen scares. Think of it like a dramatization of the nugget of truth supposedly behind any folktale or urban legend. While this framing device isn’t actually true in the case of Ju-On: Origins (to my knowledge Takashi Shimizu wasn’t inspired by any specific event), I do appreciate how this idea of showing us the “truth” behind the series sets up the show.

In a lot of ways, Ju-On: Origins feels like a reboot of the franchise. The show isn’t tied down by any of the stories told over the previous two decades, yet it’s free to use elements from those stories in new ways while connecting them to what we’ve seen before. That gives the show a familiar feeling, but it’s also wide open to new interpretations of the mythos. Even in just this first episode, I did recognize ideas from some of the earlier films in the franchise, but they felt different enough that I wasn’t constantly thinking about those films or comparing the show to them.

One idea that has been a constant for many of the films in the Ju-On franchise is how the stories are told. There are often a handful of characters in each film with their individual stories slowly connecting in some way over time. The movies can sometimes feel like anthology films in lots of ways (which makes sense given the origins of the series in an anthology film), and Ju-On: Origins is told in a similar way.

In episode one, we are introduced to two main stories and one side-story. The stories begin in 1988 with the first plot thread involving a paranormal investigator and writer, Yasuo Odajima, and his interactions with Haruka Honjo, an actress who has recently had some disturbing supernatural experiences. We learn a little more about the hauntings in this episode as Yasuo digs into Haruka’s story, and we find that Haruka’s experiences might be connected to the creepy house that has played a central role in many of the Ju-On films.

Meanwhile, a high school girl, Kiyomi Kawai, has started a new school. In this first episode we learn a bit about Kiyomi and her home life, which, to put it mildly, is anything but happy. While few details are explicitly stated, it’s clear that Kiyomi’s mother is at the very least emotionally abusive, and Kiyomi’s father, who has left the family at this point, was probably physically abusive. Kiyomi is immediately sympathetic, and the bulk of her story in this episode centers around getting to know her in her everyday life. But this is a horror series after and, and in a tense finale to the opening episode of the series, we learn how Kiyomi is also connected to the same creepy house as Haruka.

Kiyomi’s connection to the house also emphasizes the brutal nature of Ju-On: Origins. To say any more about that would spoil the finale of the first episode, but another example comes in the side-story we are introduced to. As we jump back and forth between Haruka and Kiyomi’s stories, there is one character we meet that feels somewhat out of place. Partway through the episode, we see a man driving in a car with a little girl in the passenger seat. We’re not sure what to make of this pair at first, but the scene ends abruptly in the first example of disturbing violence that we will see in the series. Or rather, we don’t actually see anything this time, but we can hear it, and that can be just as bad. It’s a jarring moment that resets the tone of the show. Up to that point, the episode felt like a creepy, slow-burn haunted house story. But this unknown man, in just a few seconds, makes us unsure of what we can expect to happen next. We can be sure what happens won’t be happy or good though.

More than just setting a darker tone though, the introduction of the man and the little girl begins a motif of real-life scenarios being incorporated into the fictional stories of the series. Later in the episode, we see the little girl in the man’s car pop up on a television news report as we’re in the middle of Kiyomi’s story. The girl has been missing for a while, and it’s now clear that the man is her kidnapper. Being the Japanese culture nerd I am, I immediately recognized the news report as being similar to something I’d read about before. In fact, the man in the car is based on an actual murderer named Tsutomu Miyazaki. The names of his victims are changed in the show, but the timeline of his crimes matches up.

For most viewers around the world, the man in the car will just be a disturbing addition to the show, but for people who know about the true story, his inclusion will add an undercurrent of reality to the series. This isn’t the only instance of adapting or straight-up incorporating real events into the foreground and background of Ju-On: Origins. I believe it happens in some way in every episode. So, even though the stories themselves are all fictional, and even the claim that the series is telling us the true events that led to the creation of the series isn’t true at all, there is enough reality thrown into the series to give the fictional elements the weight of real-life. I think it’s a great way to tell the story, and it’s one of the things that hooked me on the series right away.

In writing about the first episode of Ju-On: Origins, you probably noticed I didn’t say much about any ghostly happenings. That’s because there aren’t a lot of supernatural elements in this first episode. Haruka’s story is heavily weighted towards the supernatural, but there are really only two scenes where we are supposed to be creeped out by actual ghosts. Those scenes are effective, and I quite enjoyed them, but for the most part, episode one is based in the normal, everyday world. The actions by regular, alive people are way more disturbing than anything done by a ghost, and that’s a theme that will play out in a similar way throughout the series. In that way, episode one of Ju-On: Origins is a fairly good representation of what’s to come.

I would say to give episode one a chance if you’re a fan of the Ju-On franchise or if you’re just looking for a dark and tense series to watch. If you like what you see, or if you’re hooked like I was, then continue on. If the real-life violence is too disturbing though, you might want to stop here. The violence in the show gets more explicit as the episodes go on. Plus, the rather depressing nature of this first episode is carried throughout pretty much the entire series. If you’ve seen a Ju-On movie, you know things almost never end well for the characters, and that holds true here as well.

For me though, I think this first episode is great. It’s a welcome return to the franchise after my disappointment in last year’s The Grudge (2020), and I instantly grew attached to the characters. The scares are good, the tension is great, and the mystery is intriguing. I’ve watched this episode a good number of times now, and I still find it entertaining. I’ve rarely done TV episode reviews like this before, so I don’t have a rating system prepared, so for now I’ll just say that it gets a solid recommendation from me to watch it and keep going with the series. Join me next time as I take a look at episode two!