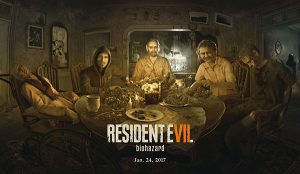 I absolutely love Resident Evil. The original Resident Evil was the game that convinced me to buy a Playstation back in 1996. I’ve bought the comics, read the novels, and still have the entire collection of Toy Biz Resident Evil 1 and 2 figures hanging up on my wall at home. As much as I love the games though, as the series strayed further away from what I loved so much about the original, I haven’t played them as much.

It took me a long time to get around to playing number 4, I never beat 5, and I’ve never even played 6. Resident Evil 7: Biohazard might reel me back in though. It appears as if Capcom is shifting the focus away from combat in favor of creating a tense, frightening experience for the player. To use a film analogy, they’re shifting from the adrenaline-fueled action horror of James Cameron’s Aliens to the nerve-racking monster horror of Ridley Scott’s Alien.

In a way, RE7 is going back to the roots of the series. The game is set in a single location featuring a huge, derelict-looking house, just like RE1. This time, the house is part of a plantation in Louisiana. The player will once again have to make crucial decisions while managing their limited inventory space while they explore, solve puzzles, and worry that the next door they open will reveal some hideous beast wanting to make them a permanent resident of the house.

Speaking of hideous beasts, the new trailer reveals some of the game’s antagonists, a dysfunctional family that bears more than a passing resemblance to the family from The Texas Chainsaw Massacre. That is the Baker family, and even though their role in Resident Evil‘s ongoing mythology is a mystery at this point, they seem sufficiently creepy. I can imagine that trying to avoid them as you move through the plantation house will be a tense experience, especially with the first-person view that RE7 will adopt.

There’s not a whole lot more information concerning the game’s story or gameplay that’s been released at this point, but for now you can take a look at the new images released by Capcom earlier this week as well as the latest trailer, and PS4 users can download an updated version of the demo.