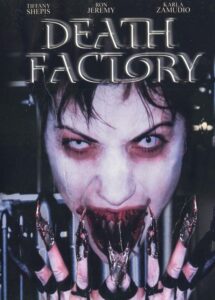 For some random reason, in the past two days I’ve come across two movies produced by Brain Damage Films. I’m not complaining, it’s just odd that I stumble upon two movies from the same low-budget production company back to back, one movie I bought for a dollar on DVD and the other movie free on Tubi. Well, I watched one of the movies (I’ll get to the other one later), and I’m happy to say that I am now a fan of what I’ve seen so far from Brain Damage. The movie I watched is Death Factory, and it’s a pretty bad and very fun movie so full of horror cliches that it feels like it was almost completely constructed from parts of other, better movies.

Death Factory is about a group of college-aged people, three guys and three girls, who decide to go party in an abandoned factory on the outskirts of town. The setup, including the personalities of the characters, feels similar to a lot of movies of this type, not the least of which being Night of the Demons. The party-goers consist of a sweet and naive young woman, her boring jock boyfriend who wants to sleep with her, a dangerous young woman who knows just enough about the abandoned location to get the group into trouble, a fun-loving guy and girl who use the party as an excuse to have sex in a gross location, and a tough loner who is smarter than he seems at first. So, pretty much like Night of the Demons minus a few characters.

It’s established early in the movie that there is a killer living in the factory, and though it takes a while for us to really get a good look at the beast, we see her handiwork in the opening scene as she brutally and bloodily rips apart two other, random people who venture into the factory to have sex. When I finally did get a good look at the killer/monster, she reminded me of a couple of other movies. She looks like a cross between the zombie version of Trash from Return of the Living Dead (with her short hair and huge mouth) and Julie from Return of the Living Dead Part 3 (in her self-harm-zombie mode). Those are two very high praises from me because I love those other two movies and characters, but the monster in Death Factory does feel like somewhat of a discount version of those characters.

And really, the whole movie feels a bit like a discount version of other movies. It seems like the writer and director is a huge fan of horror movies from the 80s and 90s, and he decided to take his favorite bits and mash them together in a way that doesn’t take itself too seriously. It’s charming in that way, and that’s probably why I had such a good time with it. The characters are mind-numblingly dumb, separating themselves not once but twice after realizing one of their friends is dead, there’s a twist at the end that made me laugh with its ridiculousness, and the production values are cheap enough that we can clearly see the seams on the fake bricks that supposed to be part of the wall in an underground tunnel. One thing the movie didn’t cheap out on is in its blood budget.

The kills in the movie are fun, and they helped add another layer of enjoyment to the experience of Death Factory. There is very little in the way of makeup effects for cuts and slashes, and the killings mostly rely on splashing buckets of blood all over the place as the monster rubs her steel-taloned fingers or steel-lined teeth over someone’s skin, but lots of red can make up for a lot of other deficiencies in my opinion. Plus, most of the killings went on just a little while too long which made them ridiculous enough to be a lot of fun. It’s like when someone tells a joke that’s just okay, but they keep saying it over and over until it starts to become really funny in a different way. Death Factory is a good horror movie in a very different way, a way that many would describe as not good.

So who would I recommend Death Factory to? Probably to fans of the movies I mentioned above, and any fan of very low-budget, cliched horror movies. I can’t really stress enough how much Death Factory reminded me of other films, even all the way up to the final scene. The final few minutes of the movie were ripped almost directly out of the original Friday the 13th. I roll my eyes every time I see that ending in Friday the 13th, but here, even though I rolled my eyes even harder, it felt like I was in on a joke. It was an appropriately cliched ending to a movie that I felt like I’d seen before. And now that I’ve seen Death Factory once, I’m sure I will come back and see it again.

Death Factory is available for free on Tubi.