Aquarium of the Dead 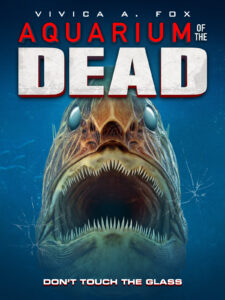 I love zombie movies. I also love aquatic monster movies. I’ve also seen a fair number of movies putting human zombies underwater which can be a whole lot of fun (like in Shock Waves or the classic shark versus zombie scene in Zombi 2). I’ve never seriously given much thought to having zombified sea creatures as a film’s main monsters though. As unrealistic as the living dead are, zombie sharks and octopuses seemed like an unnecessary step in the direction of ridiculousness. Besides, a lot of sea life is already simple-minded and aggressive, a trait that zombification often instills in humans. Despite the ridiculousness of the scenario (or actually, probably because of the ridiculousness), low-budget production company The Asylum recently released Aquarium of the Dead, a movie featuring zombified sharks, octopuses, walruses, spider crabs, starfish, and more. As one might expect, the results aren’t very good, but the movie will probably be fun for a select audience.

Aquarium of the Dead takes place over the course on one day in The Shining Sea Aquarium. The movie starts with a marine biologist and her assistants attending to a large octopus that is behaving erratically. The octopus is injected with something meant to stabilize it and save its life, but it ends up killing the octopus instead. However, the creature reanimates and attacks, killing the biologist’s two assistants before escaping its tank and crawling into the facility’s air ducts. The octopus is now a zombie, and the mucus it excretes throughout the aquarium kills and reanimates all of the sea creatures in every part of the facility. The aquarium goes on lockdown, trapping the workers and a few special guests inside, and the bulk of the movie follows a few different groups of people as they run back and forth through the complex, trying to survive multiple encounters with the crazed sea life.

The premise is promising in a goofy way, but the execution is lacking in many, many ways. The cast does well with what they’re given, and the lead actors (especially Eva Ceja and Vivica A. Fox) are what kept me interested enough to keep watching as the movie meandered its way to its conclusion. The plot is easy to follow since it really doesn’t go anywhere beyond running around and trying to find an exit, but some of the actions taking place are inexplicable. For instance, Vivica A Fox’s character is the head of security, and she’s using a walkie talkie to direct a group of people to a fuse box which she apparently can’t get to. Then, when the group arrives, Fox’s character shows up out of nowhere, says nothing of importance, and dies in a physics-breaking way (sorry for the spoiler).

Speaking of breaking physics, the action in the movie just looks odd. Characters move in impossible ways from shot to shot, just so they’re in the right position to be killed. And sometimes, the action is completely absent like in a scene where two characters tell us they see otters coming at them, then in their next scene they’re running away and commenting about how crazy the otters were acting. We never see the otters. We do see many other creatures, but the effects are primitive and don’t look even remotely like they exist within the same reality as the characters. Plus it seemed like many of the creature effects were reused over different shots. I know the movie probably didn’t have much of a budget, but it just felt like there wasn’t much effort to try to dress things up and cover some of the glaring weaknesses.

I do get it though. The Asylum has kind of made a name for itself for its low-budget charm and being dumb for all the right reasons. They made the Sharknado movies (which actually get directly referenced by one of the characters in Aquarium of the Dead), and Aquarium of the Dead is the third part of the Zoombies trilogy. I’ve never seen any of those movies, but I have seen other Asylum pictures. I can’t say I’m a fan of what I’ve seen, but I know they do have fans out there. I love tons of terrible movies, but from what I’ve seen of The Asylum, it’s just not my preferred brand of terrible. To me, Aquarium of the Dead feels unfinished and intentionally bad just so people can goof on it. That’s fine, but I just found myself getting bored by the end, so I can’t recommend the movie. Fans of the movies I just mentioned might want to check it out, but others may want to wait until it pops up on a streaming service you already have a subscription to. Or just pass on it altogether.

Aquarium of the Dead is available on various VOD sites including Amazon, VUDU, RedBox, and more.