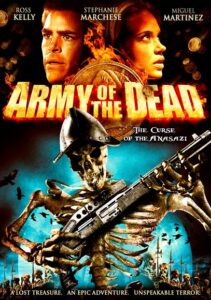 Army of the Dead (2008) follows John (Ross Kelly), a guy who looks a bit like Chris Pine, and his wife Amy (Stefani Marchese), a woman who looks a bit like Danielle Fishel. Amy surprises John with a trip to Mexico for some off-road racing and camping, and they’re joined on their trip by a group of people including some old friends and John’s professor from college. The trip is going well enough, but Prof. Vasquez has an ulterior motive. The professor has tracked down the site of the legendary gold of El Dorado, and he takes a side trip with some mercenaries to claim the treasure. The gold is cursed though, and Vasquez accidentally unleashes an army of undead conquistadors whose only mission in the afterlife is to viciously murder anyone who gains knowledge of the gold’s location.

It’s kind of like Leprechaun (1993), but instead of one evil Irishman killing everyone, it’s countless skeleton warriors from Jason and the Argonauts (1963). Sounds pretty fun, right? The trouble is, the stop-motion skeletons from 1963 look better than most of the effects in Army of the Dead. The movie came out in 2008, but the skeletons, blood, and explosions all look like they came out of the 1990s. Goofy computer effects aren’t a deal-breaker for me, they’re actually a plus for me most of the time, but fair warning if you’re thinking about watching. The effects dominate the latter half of the movie, so you better get used to them.

The plot is largely nonsensical, but I think that’s to be expected in a movie like this. Common plot elements pop up over and over (as in: relationship drama, mercenaries wanting more money, randomly getting an ancient Japanese sword as a gift so you can have a weird sword fight with a skeletal conquistador), but none of that really means much once the killing starts. Getting to know the characters felt like wasted time since what we learned didn’t have much of anything to do with how the characters handled themselves under stress. Regardless of its shortcomings, Army of the Dead (2008) is just a silly, good time for those of us who enjoy cheap blood and horror. I can’t really recommend it for anyone beyond that.

Here’s a very low quality trailer for Army of the Dead.

Army of the Dead is available for free on Tubi: https://tubitv.com/movies/458471/army-of-the-dead