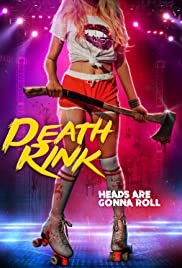 For horror fans like me who grew up during the slasher boom of the eighties and into the nineties, the ingredients of a basic, bare-bones horror movie are etched into our minds. All you really need is an isolated location, a group of young people, and a killer to murder them each in turn. It’s a lot like a cheese pizza. Even without any extra toppings (like nudity or memorably inventive kills), a plain pizza is still pretty good as long as you’ve got the crust, sauce, and cheese. Death Rink is a cheese pizza of a slasher movie. The basic ingredients are there, but there’s not much more to make the experience particularly tasty.

Death Rink is about a group of young people, most likely late teens to early twenties, and their manager who work at a roller rink called Skate King. The rink is closed for the night, but the kids and their boss are hanging out after-hours to celebrate the birthday of one of the workers with beers and a cheese pizza. After the workers spend a very lengthy time talking about sex, relationships, and the story of a child who was killed in the rink years ago, they all begin to split up to take care of their work duties so they can go home. But in the darkness of the locked roller rink, a masked killer is killing them one by one.

Death Rink is about as basic as it gets for a slasher movie. All the elements are there, but there’s very little that helps it to stand out from countless other slasher movies. The dialogue is fine, the acting is about what you’d expect from a super-low budget movie, and the kills are okay. It takes quite a while for the action to really start, so you do get to know most of the characters decently well, but in the end it feels like none of that really matters to the plot’s progression. The murder sequences, which could save an otherwise meandering plot, range from a pretty good throat slashing to an underwhelming choking with a phone cord.

Death Rink feels like it was a movie made out of love for the slasher genre by people who just wanted to have a good time, and for that I think it’s pretty good. Writer/director Daniel Zubiate appears to have made a few movies with the same basic plot as Death Rink, with one taking place after-hours at a bar, and one taking place after-hours at a movie theater. I’ll probably take a look at those when I get another craving for a cheese pizza, but that craving is pretty rare. There are better options out there, so I can only recommend Death Rink for die-hard slasher fans who are willing to sit through lots of silliness for a few pretty good moments.